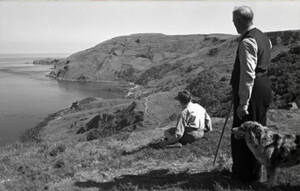 The Folklore of Ireland Society is one of Ireland’s oldest cultural societies. It was established in 1927, with the aim of collecting, preserving and publishing Irish folklore: stories, songs, oral history, and much else. Its motto, Colligite quae superaverunt fragmenta, ne pereant – Ioan. vi 12 (Collect the remnants so that they may not perish) encapsulates the ideas of the founding members. From the beginning, the Society promoted the collection of folklore. It also organised lectures and talks on folklore topics, and published a journal entitled Béaloideas.

How did it start?

The enthusiasts who wished to establish the Folklore of Ireland Society held their first meeting in November 1926, and the Society was formally established in January 1927. Among the first officials of the Society were the writer Pádraig Ó Siochfhradha (‘An Seabhac’),  Douglas Hyde (‘An Craoibhín Aoibhinn’), writer, folklorist and Professor of Irish in UCD, who became the first President of Ireland, and  Séamas Ó Duilearga (James Hamilton Delargy), folklore scholar, who founded the Irish Folklore Commission, in 1935. The object of the society as stated in the editorial of the first issue of Béaloideas, which appeared in June 1927, was to collect, preserve and publish the folklore of Ireland. Béaloideas now numbers over eighty volumes and can be accessed online at www.jstor.org.

Over the decades, some of the functions of the Society have been taken over by other institutions. In 1935, the Irish Folklore Commission was established. The Commission employed several full-time folklore collectors, enabling the Society to concentrate on publishing folklore, principally in it’s journal Béaloideas, to organise public lectures and events, and to support the work of the Commission in a variety of practical ways.

Béaloideas is still published annually. Its design and contents have naturally changed over the years. For many decades, it published folklore texts: stories, songs, and other such material. These days, these texts are more likely to be accessed online on sites such as the National Folklore Collections online platform Dúchas.ie In the early 1970s, after the establishment of Irish Folklore as an academic subject in University College Dublin, the journal began to focus on research articles discussing and analysing folklore, and has since become one of the leading journals of folklore scholarship in the world, publishing writing of high academic standard on every aspect of folklore, as well as reviews on the latest significant publications in the field.

The Society organises three or four lectures, in the autumn and spring of each year, and an annual general meeting, which is traditionally held on the last Monday of January. Lectures are also traditionally held on Mondays, and cover a wide variety of topics. Over many decades, the Folklore of Ireland Society lectures took place in Newman House, Stephen’s Green, not far from 84 St Stephen’s Green, home of the Irish Folklore Commission until 1971.  About twenty years ago lectures moved to UCD, Belfield. Over the past five years, the Society has been kindly accommodated by the National Library of Ireland, Kildare Street, and we hope to continue to use this beautiful and central premises for our events. During the Pandemic, lectures have been presented online. It is likely that this will continue to be the case until the end of 2021. It is also likely that from now on some lectures will be given online, and some in person.

The Folklore of Ireland Society is an independent society but has always had a strong connection with University College Dublin, where the National Folklore Collection, successor of the Irish Folklore Commission, is based. Since 1927 it has had four presidents:  Pádraig Ó Siochfhradha (‘An Seabhac’), Aindrias Ó Muineacháin and Anraí Ó Braonáin. The current president is Éilís Ní Dhuibhne Almqvist. Béaloideas has been edited an impressive number of distinguished folklore scholars: Séamas Ó Duilearga, Bo Almqvist, Pádraig Ó Héalaí, Séamas Ó Catháin, and Ríonach Úí Ógáin.  The current editor is Anne O’Connor.

Membership of the Society is open to everyone. Members receive a copy of Béaloideas annually and are invited to all Society events. Members support the continued publication of Béaloideas and the provision of talks and debate on Irish and international folklore to a wide audience.  Details on how to apply are available on this website.